We’ve covered the narrative about Black Eye Club a couple of times before.

First, we can do a little background if you don’t know anything about this topic. Then, we can continue to talk about Prince Philip as a DOUBLE member!

Some people say that if a thing happens once, then it is happenstance.
If the same thing repeats, it is a coincidence. But what we call it if it happens for the third time?

Or, what if it repeats a dozen or two dozen times?

Let’s not confuse people, and we aren’t writing about the Clinton Kill List.

Our topic today is the ‘’Black Eye Club.’’

I guess that you know about this club, but if you haven’t heard, then your mind will be blown.

Do you know people who suffered a black eye? But, a black eye, a bad one, the enormous black and blue shiner?

I will answer. First, I don’t know such a person!

But, we commonly see famous people with this problem. For them, it happens all the time.

It is strange, isn’t it?

See below, and you will understand.

What's up with the "Black Eye Club?" pic.twitter.com/etBJGnMUua

4)There are numerous politicians and celebrities who have had a (left) black eye. Remember, this is about Royal Authority. #Qanon pic.twitter.com/pg92vmQ1l4

Riiiight. Sounds like the good ol “I fell down the stairs and got this black eye” excuse. Hillary trying to teach ol’ Bern a lesson ?

Just hours after suffering injuries from a fall in his home, the oldest living former US president traveled to Nashville, where he and his wife, Rosalynn Carter, have been working on building new porches for 21 homes with Habitat for Humanity https://t.co/cnmgYLWogz

I want to know why it happens only on the LEFT side of the face. How is it possible for all the celebrities to have the black spot on the left side in the same place?

Now, we can move to the point.

Some people worship the ground when they see Prince Philip, but I think it’s stupid!

You don’t have to worship the Royals!

The Royals are taking from the ordinary people, so they live lives of opulence. How can you defend them?

You know that this isn’t the worst thing in the story!

Have you seen The Fall of the Cabal? If you have a negative answer, leave everything and start watching!

Once you saw the video, you know that the Royals are deep within the Cabal.

You have to STOP worshiping, trusting, and honoring THEM.

We have to mention the Cabal-member Prince Philip and his participation in the Black Eye Club.

He was a member of the club TWICE!

What’s the catch in the club so that all-powerful politicians, entertainers, and celebrities get these black eyes? I haven’t seen ordinary people have such injury,

”Prince Philip was sporting a badly-bruised eye at a reception to commemorate the 800th anniversary of Magna Carta at Buckingham Palace this evening.

The 93-year-old Duke of Edinburgh was also wearing two butterfly stitches on a cut to his right ear that he received during his Christmas Break in Sandringham last month.

The Duke of Edinburgh had some painful-looking bruising to his eye at an event at Buckingham Palace last week to commemorate the Magna Carta. He also had two butterfly stitches on a cut that he had sustained a couple of weeks earlier while on his Christmas break in Sandringham.

It isn’t the first time that the Duke has sported a black eye in recent years – in April 2013, he carried a similar mark under the same eye during an official engagement in Canada.

At the time, it was reported that he hadn’t fallen and had simply woken up with the mark on his face.

Several Members of Parliament, constitutional historians, representatives of non-governmental organisations, and senior figures from the legal profession attended the reception at the palace to celebrate 800 years since the Magna Carta was sealed in 1215.”

Do you think that this may be a HUGE coincidence?

In March 2021, we have the newest member, Mittens Romney!

Maybe these celebrities are the clumsiest people, but at the same time, most coordinated.

I think that they want it to look like they are clumsy, but, in fact, they are highly coordinated to hit the precisely same spot.

You know what…this is nuts. Mitt Romney has a black eye. Remember other leaders with injuries to their eyes too.

What the hell? Who ordered the code red? https://t.co/d2Z5OvDvNs pic.twitter.com/uEpl2u7g96

Are Harry Reid and Mitt Romney part of some type of Mormon Fight Club I am unaware of? https://t.co/6HF8t7Wj3l

"Soul Scalping" – Is Facial Bruise Mark of the Beast?https://t.co/IzIaHenbMk

”Sen. Mitt Romney was knocked unconscious when he fell in Boston over the weekend, leaving him with “a lot of stitches” and a black eye.

The Utah Republican said he was visiting his grandchildren when he got injured.

With noticeable bruising under his right eye, Romney infused some humor into the situation.

“I went to CPAC, that was a problem,” the Republican lawmaker joked, referring to the Conservative Political Action Conference that ended Sunday.

Romney was not invited to the marquee event after receiving backlash over his vote to impeach ex-President Donald Trump.

Asked how many stitches he received, Romney claimed he was not sure.

“A lot of stitches. I don’t know how many. I asked the doctor how many stitches and she said, ‘I don’t know,’ but it’s all through my eyebrow and my lip.””

As you know, we aren’t jumping to conclusions.

But, we want to say that this is not right. Also, if my opinion matters, this isn’t a coincidence.

Moreover, The Sun also noticed this ‘’coincidence’’ and reported.

”NUTTY conspiracy theorists have claimed celebrities with black left eyes are marking themselves out as members of the ILLUMINATI.

Actors, musicians, politicians, and even the Pope have all been snapped with shiners recently – sparking claims they are members of a secret society.

They claim bruised left eyes – known as ‘Illuminati shiners’ are marks given to those who have scaled their way to the top of the sinister organisation.

Radio host Sherry Shriner – who wrote ‘Interview With The Devil’ – said: “You cannot be on TV now, without signing on the dotted line.

“The bizarre recurrence of facial bruises on Illuminati politicians and entertainers has resulted in speculation that their souls have been replaced in a satanic ritual called ‘soul scalping’”.

Shriner, who died last year, claimed all of the world’s leaders have been soul-scalped.

She also claimed to have been able to speak to the devil.

Among the celebs to have sported black eyes over the years are Adam Sandler, Prince Philip, George W Bush, and Liz Hurley.

Prince Andrew showed off one in 2017, while Prince Phillip reportedly “woke up” with one one morning in 2013.

Gossip columnist Perez Hilton claimed a black eye was given to him by Polo Molina – the manager of the Black-Eyed Peas.

Pope Francis had a bad eye cut last year, which he attributed to an accident in the ‘Pope-mobile’.

And George W Bush claimed he had been hit in the face by a microphone stand during a speech.”

Now, we have to show you the last! From the video, you can perfectly understand the point.

It will shock you and horrify you at the same time!

Maybe the video isn’t in English, but you will understand.

How the Illuminati Black Eye Club, the abduction of Kids for sacrifices, and the use of Adrenochrome for nefarious purposes by the rich elite/Illuminati Satanic Order. 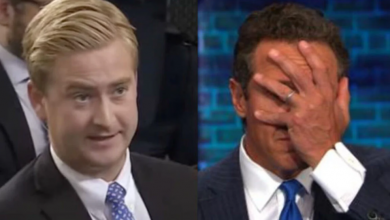 Chris Cuomo Tries To Take A Swing At Peter Doocy, Misses, And Falls Flat On His Face 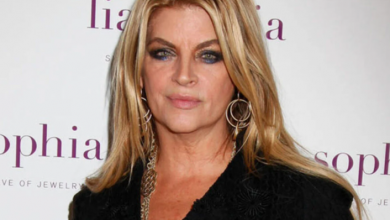 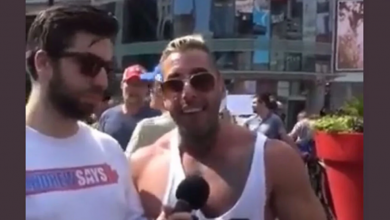 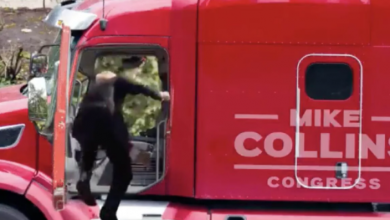