Americans struggle to survive the month due to the record-high gas prices, soaring inflation, and huge consumer costs happening during the Biden administration.

Careers board Lensa produced a new study, sharing the least and most affordable states to live in the US.

The study says “the affordability gap in states around the US, comparing the cost of living to the average wage to reveal the percentage difference.”

To draw its conclusions, the study reviewed:

Americans in Hawaii face the highest cost of living, “Hawaii was the least affordable state in the US with the national average wage being a whopping 20.32% less than the average cost of living. Hawaii also had one of the highest housing spends in the study, spending $13,864 on housing.”

Oregon is the second least affordable state in the US. 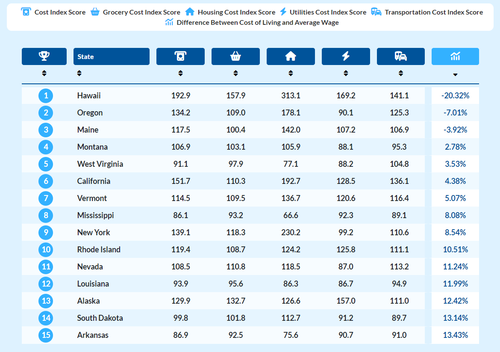 As far as the most affordable places to live, the study found: “Virginia was named the most affordable state in the US with the national average wage being a whopping 49.64% higher than the average cost of living.  Virginia also had one of the lowest transportation costs, spending $8,716 per year on transport.”

Illinois followed closely behind, with the national wage being 44.8% higher than the average cost of living, the study said. Texas came in third.