It is very weird.

Maybe you can use the word ‘’creepy bastard’’ as his second name. Both of the words fit very well.

You will say that it’s an old story, OLD BUT GOLD!

I haven’t heard it before!

In 2017, Zuckerberg had an interview sharing his weird things!

”Yes, it will bother you because you’re human. I was human.”

Immediately he realized what he just said because of the audience’s looks. As everyone would do, he looked for excuses, but they didn’t have any sense this time.

How can someone say those things even if he is confused?

Watch the video below.

Mark Zuckerberg wants you to know that he’s 100 percent human. A clip of the Facebook CEO giving advice to a high school student was uploaded to YouTube on Friday, where he tells an audience that he was human before correcting himself to clarify that he still is.

“You kind of need to remind yourself that you need to focus and try not to let stuff bother you as much as possible, but it is going to bother you because you’re human,” Zuckerberg said. “I was human. I am human, still. But, um, but I was just referring to myself in the past. Not that I was not human.”

The clip was shared on the “videos” section of Reddit on Sunday, where, by the time of writing, it had been upvoted more than 7,000 times.

“Logically explaining why you said you’re not a human is the best way to reassure people that you’re a human,” said Reddit user lulz.

The clip was taken from a Q&A session hosted at Facebook’s headquarters back in 2014. Zuckerberg was responding to a question from East Palo Alto eighth-grade high school student Melissa Gomez, who asked how he got past obstacles to reach his current position.

Zuckerberg has something of a reputation for awkward public appearances. In a 2010 interview, an incredibly nervous Zuckerberg was asked about privacy on Facebook, an issue the social media platform has come under fire for. His tour across the United States to meet regular Americans has led to speculation he’s laying the groundwork for a presidential bid. A virtual reality tour to Puerto Rico earlier this month, where Zuckerberg demonstrated the technology in front of images of the hurricane’s aftermath, was labelled “heartless.”

During a Q&A last year, he responded to a question posted in the live video’s comment asking if he was “secretly a lizard”:

“I’m going to have to go with no on that,” Zuckerberg said. “I am not a lizard. But keep the high-quality comments coming in, this is surely on track to be a great live Q&A if we continue getting stuff at that level of quality.”

Zuck’s statement that he’s a human, not a robot or something else, isn’t convincing many people online.

This guy is a massive creep! pic.twitter.com/nUVtanGHgu

You can see two other memes. 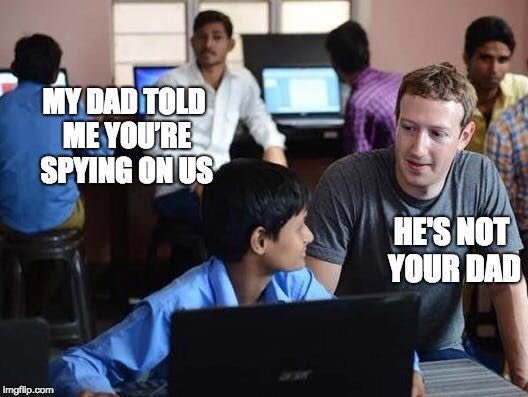 Hank Kunneman: “I Have Been Working Behind The Scenes But Now I Will Show, My Hand”