“There were no complications, no problems, no difficulties. I never looked back, and I was never sorry… I was very, very grateful.”

The Dems raised their voices over the leaked document stating the SC was debating overruling Roe v. Wade. It wasn’t a shock to hear that the Dem. Rep. Gwen Moore of Wisconsin shared her controversial issue. Some activists say that it’s a woman’s right to have an abortion, the Representative stood up for that right, and she confessed that she has never regretted having her own abortion.

The Democrat stated, “There were no complications, no problems, no difficulties. I never looked back, and I was never sorry. I never felt like I did something that was inappropriate for me or my family or my situation. I was very, very grateful.” 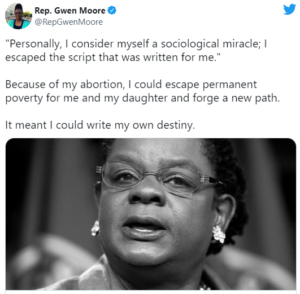 “I had no money, no job, no occupational preparedness; I wasn’t even able to adequately take care of the one-child I had. I was desperate for an abortion,” she noted. “Because of my college connections, I had a network of white feminist women. I got the phone number of a doctor in Madison, Wisconsin, and he referred me to a fund. It was run by these primarily upper-middle-class white women who provided funding for abortion care. They gave me the money for a round-trip ticket to New York City and a car service to and from the facility.”

The Representative added, “I really needed to reclaim my life, and having an abortion made a huge difference. I was able to get a degree. I was able to get some work skills under my belt and lean into my talents. I had my second child when my daughter was eight years old, and those eight years really made a difference in terms of making sure I wasn’t permanently mired in poverty.”

“The Constitution does not prohibit the citizens of each State from regulating or prohibiting abortion. Roe and Casey arrogated that authority. We now overrule those decisions and return that authority to the people and their elected representatives.”