Truth Social gathered an army of supporters in just a couple of months. Well, President Trump was super quiet. He didn’t even post anything until now. It’s time to speak up!

Yes, our President is back, giving us hope! Oh, wait, what does #COVFEFE mean? 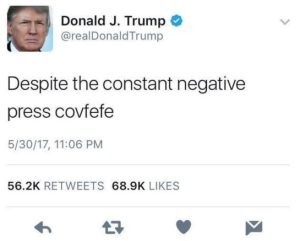 President Trump wrote this on Twitter long time ago and encouraged everyone to find the true meaning of it. 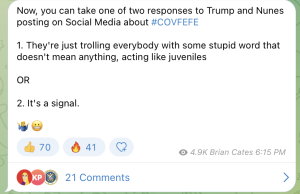 Dan Scavino on #covfefe: “Those that need to know, know. But the covfefe one is probably one of the all time greats, and one of these days I’ll be able to tell or share that story.” (June 2021)

Devin Nunes says there IS a meaning behind #COVFEFE and he hopes to explain it soon…@WeLovePresTrump pic.twitter.com/l8WR6FJh7T

Former President Trump joined his own TRUTH Social on Thursday, posting on a social media platform for the first time in more than a year with a throwback to his now-infamous 2017 typo “covfefe.”

“I’M BACK! #COVFEFE,” Trump posted on TRUTH Social Thursday afternoon with a photo of himself in front of his Mar-a-Lago property in Palm Beach, Florida.

The hashtag “covfefe” was referring to one of his deleted tweets in 2017 in which he decried the media’s coverage of his administration.

Trump, on Monday, told Fox News he would not return to Twitter, even as Elon Musk purchased the social media company and reinstates his account. Trump said he would, instead, use his own TRUTH Social as the sole platform for his voice.

Twitter, on Monday afternoon, announced it agreed to be acquired by Musk for $44 billion.

“I am not going on Twitter, I am going to stay on TRUTH,” Trump told Fox News. “I hope Elon buys Twitter because he’ll make improvements to it and he is a good man, but I am going to be staying on TRUTH.”

Trump told Fox News on Monday he would begin “TRUTHing” this week.

The Trump Media & Technology Group social media platform, TRUTH Social, formally launched last month and has been up and running under its brand-new cloud services for four days, after having beta-tested since February. Former Rep. Devin Nunes, R-Calif., is the company’s CEO.

“We’re taking in millions of people, and what we’re finding is that the response on TRUTH is much better than being on Twitter,” Trump said. “Twitter has bots and fake accounts, and we are doing everything we can.”

He added: “The bottom line is, no, I am not going back to Twitter.” Cates knows what he is doing. This is not a coincidence.